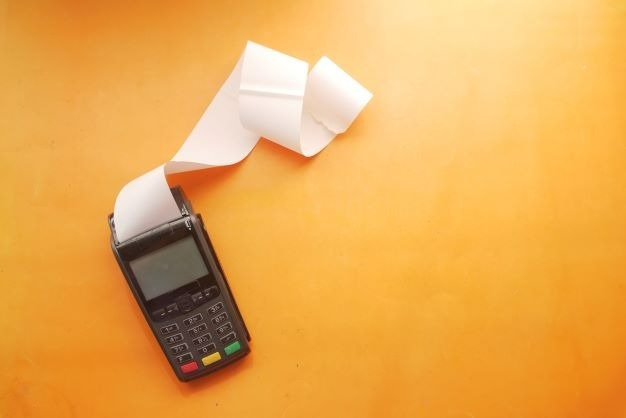 You may have heard the report – inflation, as measured by the Consumer Price Index (CPI), hit 7.9% recently. National gas prices are hitting all-time highs. It’s hard to escape the reality that we are living in an inflationary environment.

But before we start making too many comparisons with inflation from the 1970s and 1980s, let’s try to understand what’s different this time and look at this in context as it relates to household net worth, employment, and energy independence. 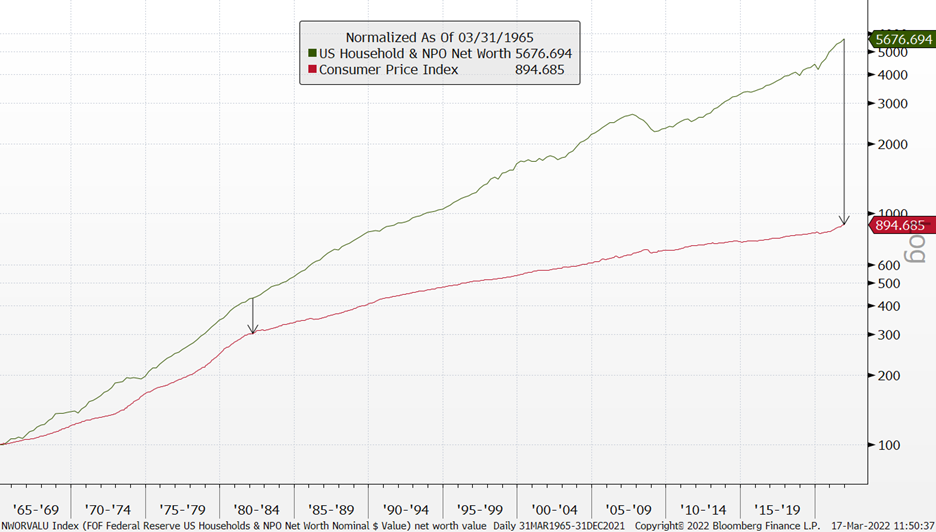 When we compare the inflation index with the household net worth of Americans, net worth has increased by many times that of inflation. The chart above illustrates this by normalizing inflation and household net worth. The difference between the two was very small during the 70s and 80s and it has widened significantly over the last several years as the arrows in the chart illustrate. Net worth of households has increased more than 30% while inflation is at roughly 8%.

The economic slowdown that was induced by the COVID-19 pandemic certainly led to shortages and supply was not equal with demand. Factories were shut down. In some cases, producers anticipated incorrectly that demand would be lower and reduced production only to see that demand actually increased. This coincided with the largest set of fiscal and monetary stimuli that we’ve ever seen. Not only were Americans receiving multiple checks in the mail, but we expanded the level of money supply, which, when not balanced with higher consumption of goods and services, is inflationary.

But during this time, home prices and other asset prices also increased significantly. Even the price for used cars went up materially.

Some would argue that this was a case of the rich getting richer and the poor being left in the cold. But the data would claim otherwise. 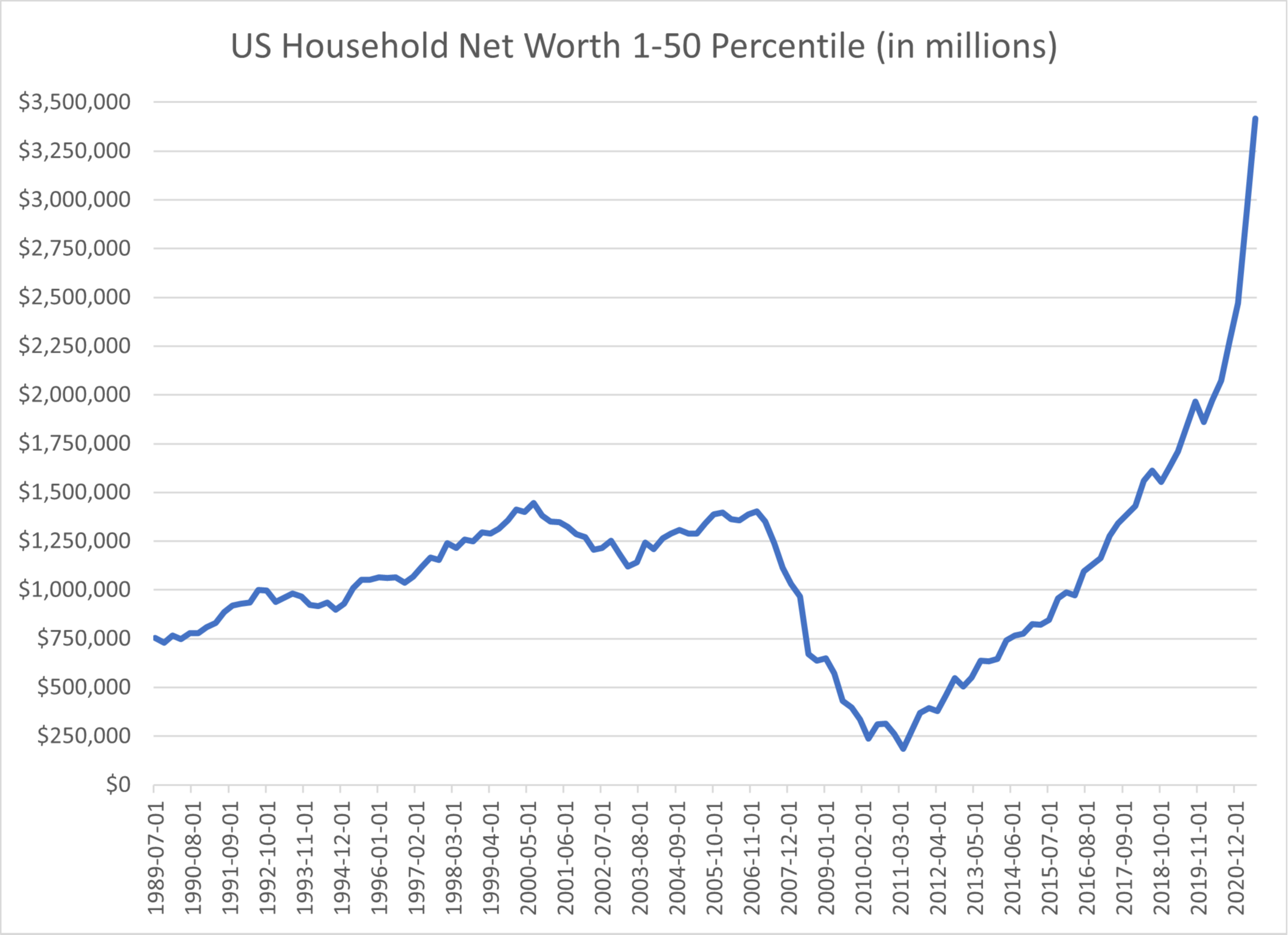 The chart above shows the growth in net worth of households in the bottom 1st to 50th percentile, the lowest economic demographic. During the 2000 to 2003 period that coincided with the Tech Bubble bursting and the recession that followed, the net worth for this demographic dropped 18%. During the 2007 through 2011 period, which coincided with the Great Recession/Global Financial Crisis, the drop in net worth for this demographic was very painful, falling more than 85% to $183 billion. But from 2011 to the beginning of 2020, the aggregate net worth increased more than 10-fold. This was before the pandemic slowdown. We don’t have recorded data for the early months of the pandemic, but from the beginning of 2020 through July of 2021, this demographic, along with all other demographic groups, increased substantially.

How does this all tie in with inflation? Inflation tends to impact the less fortunate more so than the well off. While not minimizing any pain that higher inflation, including higher gasoline prices, may have on different socio-economic groups of people, due to a much higher increase in household net worth, the effects of inflation today are much lower than they were during the 70s and 80s.

Let’s not just look at it from a net worth standpoint, but also from an employment standpoint. Wages have increased in the current environment, which is also inflationary, but people are better protected against inflation with a very good job market. There are currently nearly five million more jobs available than there are people to fill them (see chart below). 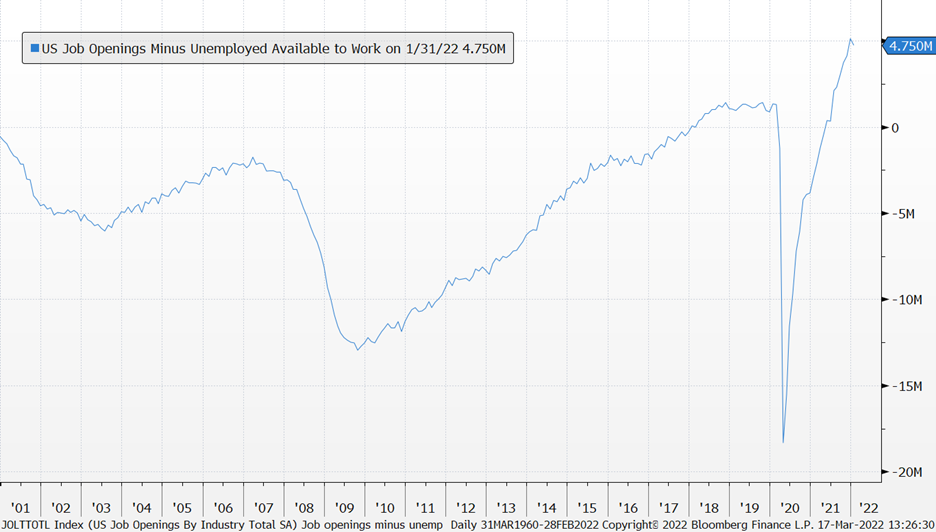 In comparison to the last two recessions, it took 122 months (more than 10 years) for unemployment to bottom after the Global Financial Crisis and 47 months for employment to fully recover after the Tech Bubble recession of.

Another factor why today’s inflationary environment is not as bad as the last one is that, as supply comes back online, shortages are reduced and price increases moderate, given a constant level of demand.

As it relates to energy and oil prices, the inflationary period of the 70s and 80s saw us more dependent and more sensitive to foreign oil prices than today. Today, we export more petroleum than import.  We continue to import crude oil, but it is less than a third of what we imported even as recent as 2004 (source: EIA.gov). New technologies have allowed us to find much more in oil and natural gas reserves than in the past. This has also coincided with shifting more resources to produce cleaner and greener energy, also making us more independent.

Taking changes in net worth, the employment environment, and energy independence in context with higher inflation, the higher prices will not likely impact consumers nearly as much as they did during the last high inflation period of the 1970s and 1980s. Furthermore, because of the nature of how we got here regarding inflation, it is our opinion that notwithstanding the current conflict of Russia and Ukraine, we will likely see inflation moderating later this year and into next year.

We believe the Federal Reserve will be very careful, trying to stave off inflation, but also understanding that growth is slowing and doing too much too quickly increases the probability of a recession.

To be clear, countries that are poorer in terms of per capital GDP and are also large importers of oil will have a much more difficult time than we are having. Food and energy make up substantially more of their disposable income than here in the United States. And some of these countries have been locked down for lengthier periods due to the pandemic.

Our investment strategies are taking the current environment into account. Weightings in energy and commodity-related areas as well as financials and other cyclical areas continue to help diversify against some of the risks of other parts of the market, particularly larger growth and technology companies that became over-valued. We also believe it makes sense to have a lower weighting to international equities, because of the higher impact of commodity price inflation on their consumers as well as higher energy dependence.

As it relates to fixed income, we continue to like credit because financial conditions are still positive. We have trimmed our exposure to longer duration fixed income as the Federal Reserve engages in lifting off of a zero-bound interest rate policy.

We appreciate your consistent confidence in us as we seek to find the right balance of opportunities and risks for each portfolio. [1][2]